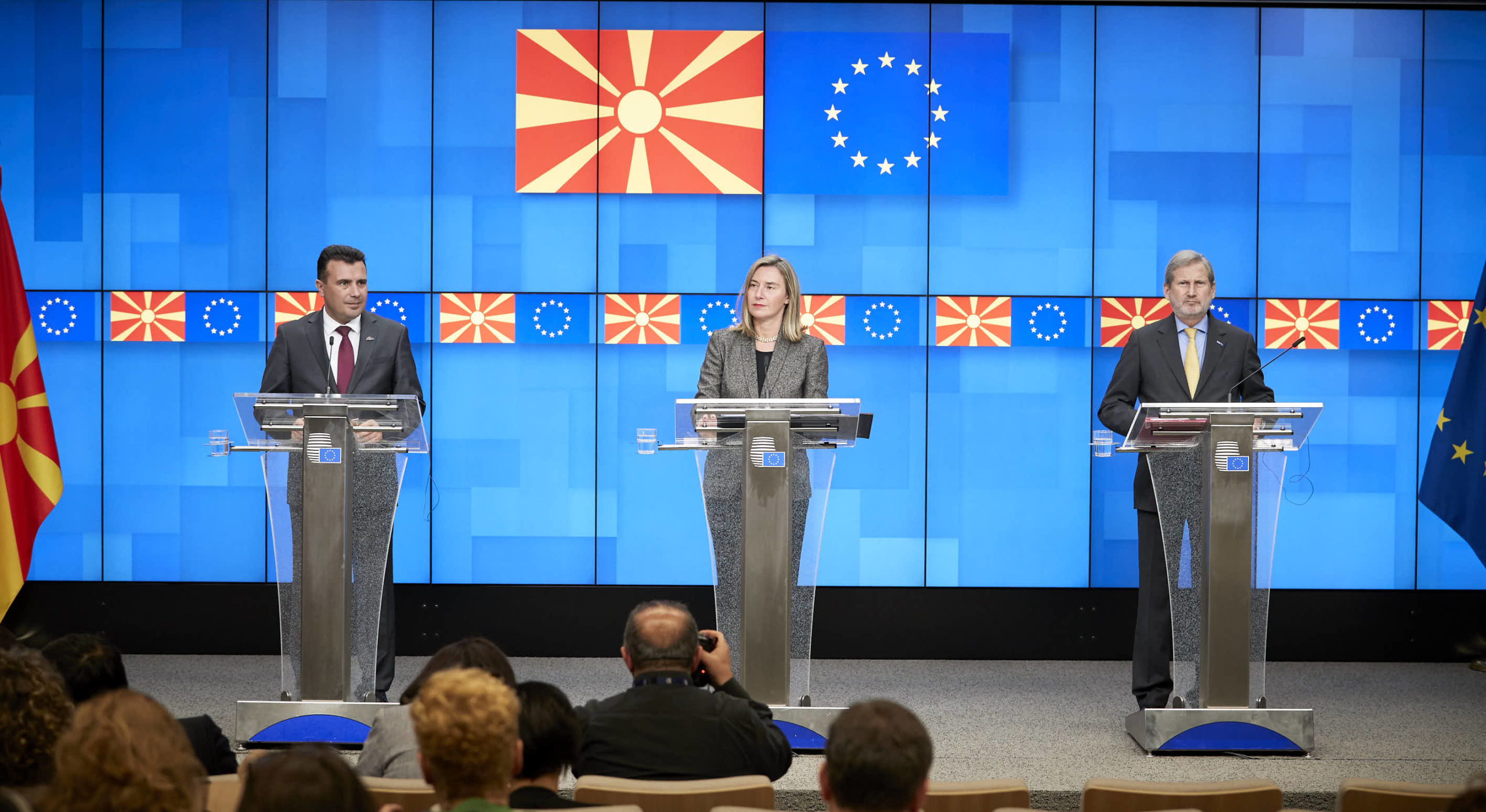 How does the EU cooperate with other countries?

The European Union is the largest and most successful regional organization in the world. But it is mostly made up of small and medium-sized countries. In fact, even its biggest member state – Germany – alone is relatively small compared to the world’s heavy hitters such as China and the United States. This large number of relatively small countries living side-by-side in Europe explains their overriding interest in adopting a cooperative and rule-based approach in their international relations. Within the EU, this is reflected in clearly spelled out decision-making rules in the Lisbon Treaty based on which the European Parliament, Council of Ministers, and European Commission shape the lives of hundreds of millions of Europeans.

Europe’s ambition to promote a rule-based international order does not stop at its border. The EU has concluded several ‘association agreements’ with other countries, mostly in and around Europe.

In 2001, the EU concluded a Stabilisation and Association Agreement (SAA) with North Macedonia, which created various joint EU–North Macedonia institutions to facilitate international cooperation. First, it set up an EU–North Macedonia Association Council that can be compared to the EU’s own Council of Ministers. Second, it created an Association Committee, where officials from both sides work together to monitor progress and prepare decisions to be taken in the Association Council. This is closer to what the European Commission does in the EU. Third, the agreement set up a Parliamentary Committee, where Members of the European Parliament interact with members of the parliament of North Macedonia. While not (yet) a member state of the EU, these joint institutions allow North Macedonia and the EU to regularly exchange ideas and work together.

In this edition of ‘International Cooperation in Focus’, I talk to Mary Teresa MORAN, who is Deputy Head of Unit for Kosovo and North Macedonia at the European Commission in Brussels. I wanted to learn more about the Association Council and Association Committee, in whose work she is closely involved.

Markus: Before talking about the joint EU–North Macedonia institutions, let me start with a question about yourself. When did you begin working for the European Commission and was it a long-held dream come true for you or just coincidence?

Mary Teresa Moran (MTM): I began working for the European Commission on 1 April 1994. I sometimes joke that this date explains the rest of my career. I had no plan B and always wanted to work for the Commission. I am originally from Ireland and studied history and classics. My parents sometimes teased me what kind of work I would expect to find as a historian (Ireland was undergoing an economic recession at the time, which may explain why the thought was at the front of their mind). And I answered: ‘I want to work for the institution that changed European history, ending cycles of war each generation.’ I then went to Leuven in the first year the Erasmus program was created and, after that, to the College d’Europe in Bruges. I then began working for the Foreign Ministry in Ireland for a bit. But as soon as I got a call from the European Commission that they would take me, I packed my bags and went straight to Belgium. I have lived here ever since.

Markus: How would you describe the purpose of the joint EU–North Macedonia institutions. Why are they useful for the EU and North Macedonia?

MTM: Let me begin with a little bit of background. North Macedonia gained independence from Yugoslavia in 1991. In 2001, North Macedonia was the first country in the region to conclude a Stabilisation and Association Agreement (SAA) with the EU. SAAs are modelled on so called Europe Agreements concluded with countries in Central and Eastern Europe in the 1990s. This shows that North Macedonia was always at the forefront of moving closer to the EU.

The overall Stabilisation and Association process consists of three parts. First, it helps North Macedonia develop through EU financial support and technical advice. Second, it increases access to the huge European market by reducing trade barriers. Third, it involves contractual relations in many other areas (e.g. human rights, environmental protection, agriculture and food safety, consumer protection, transport, energy, education etc.) to move closer to EU standards. The joint EU–North Macedonia institutions are crucial for all these issues. In the area of trade, for example, the SAA contains deadlines about what should be done in year 1, 2, 3 etc. The joint institutions are crucial in monitoring and implementing these goals.

The EU similarly benefits from North Macedonia opening up its market to EU businesses. But, more broadly, it allows the EU to fulfil its purpose of promoting regional integration in Europe. Eventually, North Macedonia will join the EU. So, the contacts we form with North Macedonia in the joint institutions now will ease the integration of North Macedonia into the EU in the future. We are basically laying the groundwork for a fruitful cooperation with a future Member State.

Markus: The EU–North Macedonia Association Council met for the 15th time in March 2019. It generally meets every year. Given that this is where high-level politicians such as ministers or the EU High Representative and the Commissioner for Enlargement meet, it is easy to keep track of. But can you tell me a bit more about the other joint EU–North Macedonia institutions? Do they also generally meet once a year and what do they do?

MTM: You are right to point out that the Association Council last met in 2019. The 2020 meeting was postponed due to the Corona outbreak. Below the Association Council there is not even only the Association Committee. There are eight joint sub-committees established in specific areas to support the Association Committee. The further down you go, the more technical – or hands on – these bodies become. All these joint EU–North Macedonia institutions meet, as a general rule, once per year. But, in fact, our team and also the specialised colleagues working in other Commission departments have constant exchanges in between these meetings. We frequently exchange emails and phone calls with representatives of North Macedonia to prepare decisions that we formally confirm when we meet once a year.

Markus: Finally, could you tell me how the Coronavirus impacted the joint EU–North Macedonia institutions and how they helped you deal with the pandemic?

MTM: We had several sub-committee meetings scheduled in the first and second week of the first lockdown. On day 4 of the lockdown, together with our partners in Skopje, we decided that we did not want to lose the work that had already been done. We agreed to keep the dates and simply move the format to video conferencing, which was new to us all. I must say that this worked surprisingly well. We had 40 minutes sessions and all of them were really productive. After we showed that this can work, a number of my colleagues involved in joint institutions with other countries also switched over to video conferencing for their own meetings. So, we were not really slowed down by the pandemic. Ministries continued working on concepts and laws, though of course more practical work on the ground was interrupted (e.g. technical experts travelling to construction sites to supervise setting up a sewage system).

The relationships we establish through joint EU–North Macedonia institutions (and those with other neighbouring countries) were also very useful to mitigate some of the fallout from the pandemic. For example, trade flows through the Balkans were very negatively impacted, with closure of borders and many lorries stuck along their routes. While trade between the EU and North Macedonia and its neighbours was already very advanced before, the pandemic enabled us to go a step further and establish so called ‘green lanes’ to facilitate movement. These are specified border crossings at which waiting times should not exceed 15 minutes, including health screenings of lorry drivers.

The personal contacts we established in previous meetings of the joint institutions (with all the Western Balkan countries) were useful in getting this set up quickly. Our contacts with Health and Finance Ministries also helped in urgently assessing these countries’ immediate needs (e.g. personal protective equipment, ventilators, test kits) as well as beginning to gear up support for the difficult socio-economic recovery ahead of us all.

Markus: Thank you very much for the interview.

This project has received funding from the European Union’s Horizon 2020 research and innovation programme under the Marie Sklodowska-Curie grant agreement No 840135.